Lately I've been playing with Kendo UI Mobile to build iPhone apps. It's similar to jQuery Mobile in that they are both HTML5/JavaScript based frameworks for buildings mobile apps. The primary thing that drew me to investigate Kendo UI was its innate ability to adaptively render a native looking app based on detecting the device it's currently running on. In other words, it will render to look like a native iPhone app if it's running on an iPhone and it will render to look like a native Droid app if it's running on a Droid. This is in contrast to jQuery Mobile which looks the same on all devices and, therefore, it can never quite look native for whatever device it's running on.

My first impressions of Kendo UI were great. Using HTML5 data-* attributes to define "roles" for UI elements is easy, the rendering looked great, and the basic navigation was simple and intuitive. However, I ran into major confusion when trying to figure out how to "correctly" build master-detail views. Since I was already very family with KnockoutJS, I set out to use that framework in conjunction with Kendo UI Mobile to build the following simple scenario: I wanted to have a simple "Task Manager" application where my first screen just showed a list of tasks like this: 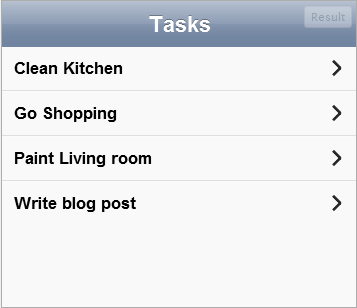 Then clicking on a specific task would navigate to a detail screen that would show all details of the specific task that was selected: 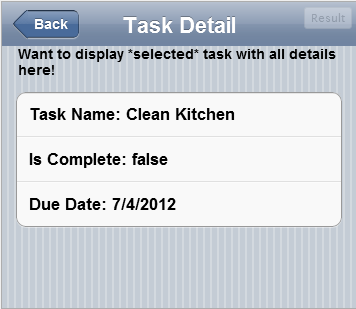 Basic navigation between views in Kendo UI is simple. The href of an tag just needs to specify a hash tag followed by the ID of the view to navigate to as shown in this jsFiddle (notice the href of the tag matches the id of the second view):

That is all well and good but the problem I encountered was: how to pass data between the views? Specifically, I need the detail view to display all the details of whichever task was selected. If I was doing this with my typical technique with KnockoutJS, I know exactly what I would do. First I would create a view model that had my collection of tasks and a property for the currently selected task like this:

I was able to get all that working with about 20 lines of JavaScript as shown in this jsFiddle. If you click on the Results tab, you can navigate between views and see the the detail screen is correctly binding to the selected item:

With all that being done, I was very happy to get it working with the behavior I wanted. However, I have no idea if that is the "correct" way to do it or if there is a "better" way to do it. I know that Kendo UI comes with its own data binding framework but my preference is to be able to use (the well-documented) KnockoutJS since I'm already familiar with that framework rather than having to learn yet another new framework.

While I think my solution above is probably "acceptable", there are still a couple of things that bug me about it. First, it seems odd that I have to loop through my items to find my selected item based on the ID that was passed on the query string - normally, with Knockout I can just refer directly to my selected item from where it was used. Second, it didn't feel exactly right that I had to rely on the "data-show" method of the details view to set my context – normally with Knockout, I could just attach a click handler to the tag that was actually clicked by the user in order to set the "selected item."

I'm not sure if I'm being too picky. I know there are many people that have way more expertise in Kendo UI compared to me – I'd be curious to know if there are better ways to achieve the same results.